The hip joint is made up of a ‘ball’ (the femoral head) and its respective ‘socket’ (the acetabulum). The ball and socket configuration allows a wide range of free movement during normal activity. Hip dislocation in dogs occurs when the femoral head loses its close association with the acetabulum. It can dislocate in a range of different directions but most commonly goes forwards and upwards (the veterinary term for this is ‘cranio-dorsal luxation’). 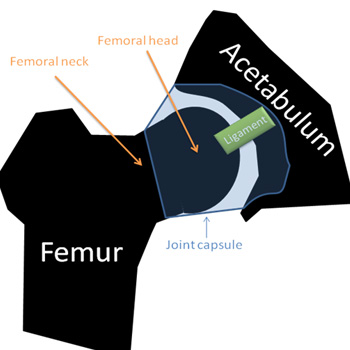 Fig 1: Representation of the association between the femoral head and acetabulum

There are a range of anatomic features aimed at maintaining a close association between the femoral head and acetabulum (Fig 1). The most important of these features preventing dislocation include:

What circumstances lead to hip dislocation in dogs?

Failure of the aforementioned structures results in hip dislocation in dogs. Trauma is the most common cause, with a motor vehicle accident the number one reported traumatic event. Less common causes include hip dysplasia, falling, spontaneous dislocation and unknown trauma. In less than 10% of cases both hips are affected. Due to the close association of trauma and hip dislocation it is important to assess for concurrent injuries, and a thorough examination, with x-rays of the whole body, will often be recommended by your vet.

How is hip dislocation diagnosed? 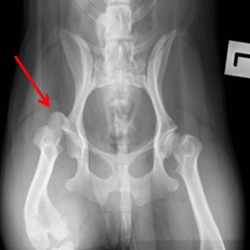 Depending on the direction of dislocation, your pet’s posture may be highly suggestive. Often the affected foot will be held off the ground and turned inside. Your vet may be able to feel an altered position of the femur relative to the pelvis. Confirmation of the diagnosis requires an x-ray of the pelvis which reveals displacement of the femoral head relative to the acetabulum.

How is hip dislocation in dogs treated?

Treatment begins with an attempt to replace the hip into position by manual manipulation (ie your vet will try to replace the hip using their hands). This is often performed while your pet is under anaesthesia. If manual reduction is successful, then an assessment is made regarding the risk of repeat dislocation. There are a range of scenarios whereby repeat dislocation is considered likely and include:

If repeat dislocation is considered unlikely, then often the leg is supported in a sling for approximately 2 weeks.

If the hip cannot be manually reduced or repeat dislocation is considered likely, then surgical repair is indicated. The decision of which surgical technique to use is up to the individual surgeon and individual case factors. Over a dozen techniques for surgical repair are reported with a combination of techniques sometimes employed. Several of the commonly reported techniques include: 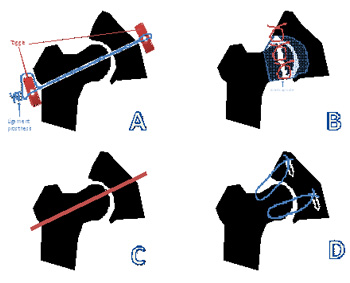 What should I expect after surgery? 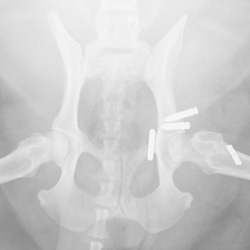 Fig 4: This x-ray was taken after surgery to correct this dog’s dislocated hip. You can see the toggles used to stabilise the hip

Your pet will need to be strictly rested after surgery for approximately 6 weeks. This is necessary to allow the joint capsule to heal and joint fluid to build up again. The femoral head ligament will not repair itself and will remain permanently torn, although this does not appear to have a significant effect on long term outlook. This rest entails strict cage confinement (for both cats and dogs – very large dogs can be confined to a small room) and gentle leash controlled walking for toilet purposes only. Pain relief will be dispensed by the attending veterinarian for several weeks after the injury. Sometimes follow up x-rays will be recommended depending on whether surgery was performed.

After the 6 week rest period, your pet can begin to exercise again, but this will need to be slowly built up over a few months before returning to normal exercise.

What if repair is not possible or the repair has failed?

Salvage surgeries are reserved for these cases. Salvage hip surgeries include:

The outcome after either salvage procedure is good with a restoration of function likely.

What are the long term expectations following treatment?

Success rates vary with the technique used and are reported at approximately 50% following manual reduction alone and up to 85% with surgical stabilisation. Early treatment is more likely to result in a successful outcome than delayed intervention so early presentation to your vet is essential. The majority of dogs will suffer a degree of osteoarthritis following this injury but this does not seem to have a major impact on comfort or long term use of the injured leg.