Deborah Pack is the kind of teacher we all wish we had. During her nearly two-decade-long career, Pack, who recently retired, placed enormous emphasis on teaching her preschool students about love, kindness, compassion and acceptance—with help from some very special assistants along the way.

“In 2003 I adopted a baby goat and asked the principal at my school if I could bring him in,” she recalls, speaking from her home near Kansas City, Missouri. “We quickly saw remarkable things happening, in terms of the children learning to love and work together to help this orphaned animal survive and grow.” 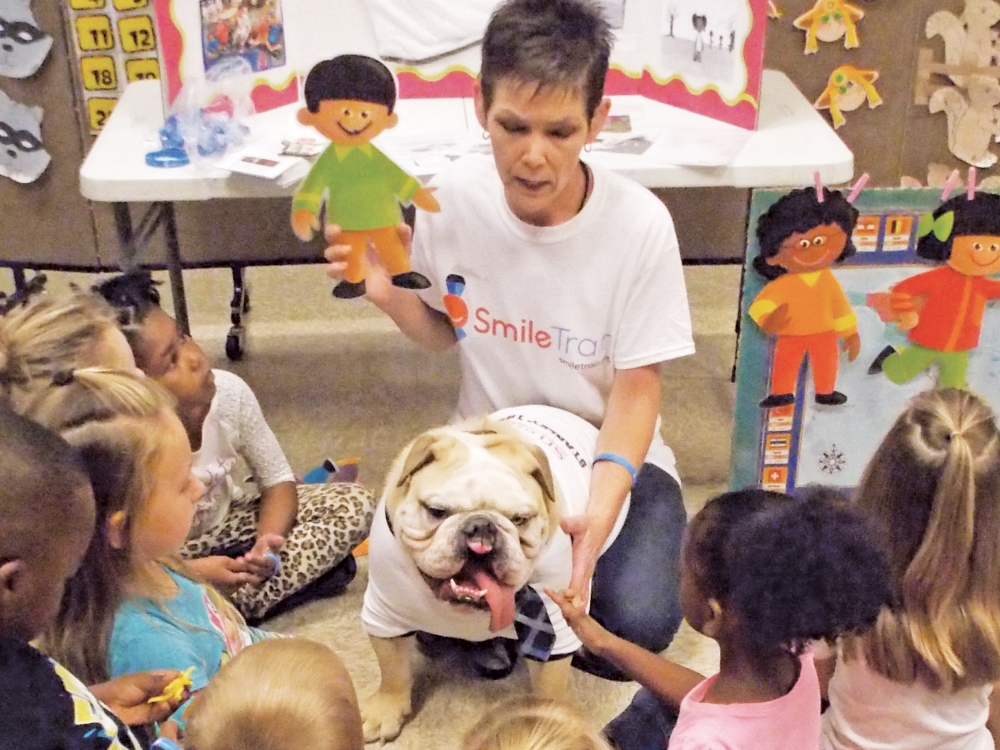 “The kids wanted to help Madeline become a therapy dog in the community,” she says. “It was amazing to see four and five-year-olds work together so diligently to get this dog to a place where she could be of service to others.”

In 2011, however, Pack saw an ominous shift in her usually sunny classroom dynamics.

“The group of children I got that year were for some reason more negatively focused on the differences they saw in each other—I could see that the bullying and name calling was beginning,” she explains. “I tried to talk to them about how our differences make us unique and are something to celebrate, but my words just seemed to fall to the side.”

Brainstorming how she could set a positive example, Pack put a call out to her network for an animal with a disability that she could bring into the classroom. Her request was answered with Junior—a deaf puppy who helped teach her students about kindness, empathy, and even humanity.

“The kids taught him sign commands and even trained him to sit in a kissing booth to raise money for various causes,” she says. “He really helped drive the lesson home that our differences—and even what may be perceived as shortcomings or disabilities—are worth embracing.”

Word about Pack’s animals and their impact on her preschool students spread. In 2014, she received a phone call from a woman with two adoptable special-needs English Bulldog puppies—Oliver, who was deaf, and Stanley, who was born with a bilateral cleft lip. Pack agreed to meet them.

“When I got there I found myself staring at Stanley—I’d never seen a dog with a cleft lip before,” says Pack, adding that the puppies’ dependence on each other was apparent.

“Stanley acted, to a large extent, as Oliver’s ears, while Oliver let Stanley use his body as a prop so he could do things like keep his head up while he ate,” she explains. “Oliver would even lick Stanley’s face clean after meals. One clearly bolstered the other’s weakness by bringing him strength. It was beautiful, and I knew I could never separate them.”

Besides the fact she could provide them with a loving home, Pack also knew the dogs would be “the perfect way to teach children about acceptance and to not judge a book by its cover.”

“It was the last piece of the puzzle of what I’d been trying to teach for years—that it’s OK to have differences,” she says. “For me, finding these boys was a real blessing.” 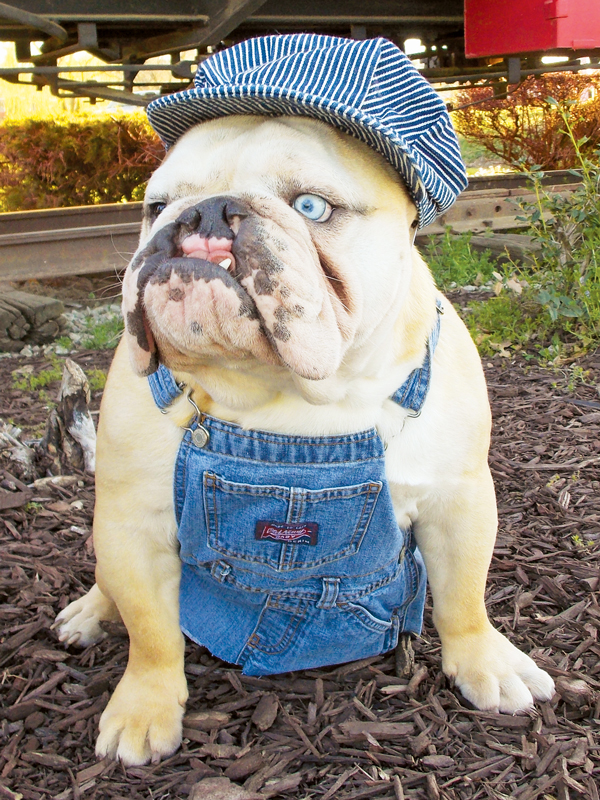 Soon after bringing the puppies home, Pack noticed that Stanley was having troublebreathing. A specialist told her the palate at the back of his throat was elongated, and that a hole in his mouth needed to be repaired. The procedure would be expensive but, when the surgeons at BluePearl Veterinary Partners hospital in Overland Park, Kansas, heard about Pack’s plans for Stanley, they agreed to do the operation for free.

“They repaired the hole, did the palate at the back of his throat and even neutered him. They were so kind,” she says. “They also asked if I wanted to have the outside of his mouth corrected—it was a purely cosmetic procedure—but I said no. Just as he has one brown eye and one blue and his back legs are irregular, his cleft palate, which looks like a split in the front of his mouth, is how he was born. We are all born with our challenges, our differences, but we can all overcome those things and go on to do great things.”

Great things, indeed. Beyond bringing the little Bulldog to her school and allowing him to impart invaluable lessons about love, kindness and resilience to her class, Pack reached out to Smile Train, an international charity that provides training, funding, and resources to empower local doctors in more than 85 developing countries to provide free cleft-repair surgery and comprehensive cleft care for children in their own communities.

“When Deborah emailed us about her dog, Stanley, and explained that he was born with a cleft palate and that she wanted to know if they could help our cause, I responded to her immediately,” says Troy Reinhart, Smile Train’s vice-president of development, who is based in New York. “We’re always looking for new ways to promote our work and to educate the public about the fact that millions of children in developing countries are suffering from untreated clefts—a condition that, though easily corrected, prevents them from eating or speaking properly or even attending school or holding a job. Deborah explained that a big part of her goal was to teach people—kids—about acceptance, and, at the end of the day, that’s really what all of our work is about, too.”

Seeing a real opportunity, Smile Train made Stanley its official “furry ambassador,” and the response ever since has been astounding.

“Before you knew it people were really loving Stanley and we found that, just as Deborah predicted, he was a great vehicle to teach people through a real-life example about cleft lip and cleft palate,” Reinhart says, adding that, since the surgery to correct these issues really is so simple, it’s rare to see a child in the U.S. or Canada with the defect untreated, making it somewhat more challenging to educate North Americans about Smile Train’s important work.

“Stanley is really helping us spread the message, particularly among niche demographics like schoolchildren and animal lovers and, at the same time, he’s working wonders in terms of teaching people about acceptance. He’s a very special dog.”

A special dog with an exceptional owner—since partnering with Smile Train, Pack and Stanley have raised funds—through kissing booths, fashion shows, and other endeavors—to provide seven children with cleft surgery. The pair also travels to schools and public events in their community to provide education about cleft lip and palate in both people and animals and to promote Smile Train’s overall mission. 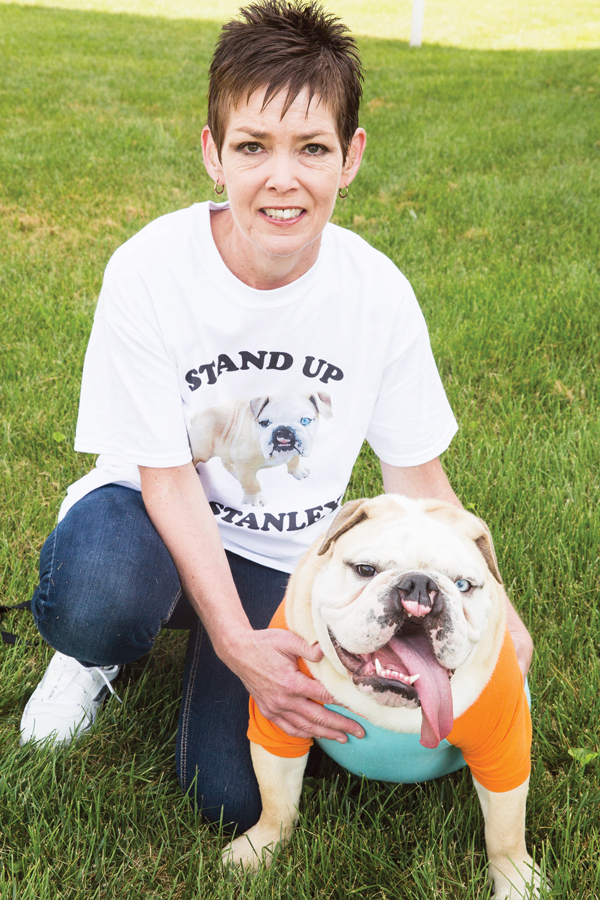 Butit doesn’t end there. In 2015, Missouri’s governor issued a proclamation naming March 24 as Stand Up for Stanley Day statewide. Now, Pack is working with her senator to make the initiative national in order to further spread the message that animals born with cleft palates ought to be valued rather than destroyed, and that we, as humans, should accept, embrace, and celebrate each other’s differences rather than resort to bullying.

And it is all, she insists, thanks to Stanley—the little Bulldog that could.

“Stanley has brought a light into my life that shines through me outward to others,” she says. “The more time I spend with him the more I see how important the work we’re doing is. He has been a remarkable asset to our lives, showing us who we can and should be in terms of us all being unique and accepting each other’s differences. This beautiful, perfect dog truly exemplifies what the power of love and acceptance can do.”

8 Types of Dog Tumors and How to Treat Them Can Cats and Christmas Trees Co-Exist?
Scroll to top