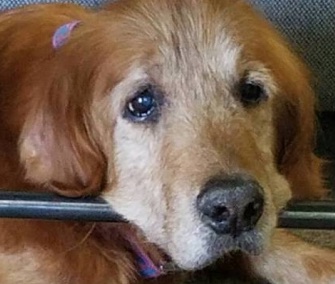 GoFundMe
Most important on Howard’s bucket list: raising money to help other senior animals in need.

An Indiana shelter with a soft spot for seniors is making life better for a Golden Retriever with terminal cancer. The staff at the Humane Society of Johnson County picked Howard up from a nearby shelter about a month ago, and he was found to have several tumors. “We don’t know what his life was like before but we wanted to make sure it had a good ending,” said office manager Pam Self, who adopted Howard and brings him with her to the shelter. She and her coworkers put together a bucket list for Howard with some little things they thought he would enjoy: being a firehouse and police dog, starring in a parade and going out for a cold treat. They’ve been sharing his end of life adventures on Facebook. Next, they plan to take him out to dinner and get him a canine massage. But the staff says the item on the list that’s most important to Howard is to raise $10,000 on his GoFundMe page to help other senior animals in need. — Read it at the Indy Star

Bao Bao, a female panda who was born at Washington’s National Zoo, will leave for the Chengdu Research Base of Giant Panda Breeding in China early next year, the zoo announced Thursday. The zoo has an agreement with China to send offspring from its adults, Mei Xiang and Tian Tian, back to the home country to breed. Now 3 years old, Bao Bao was the first surviving panda to be born at the zoo since 2005. Her older brother, Tai Shan, left for China in 2010. Bao Bao leaves behind a 1-year-old brother, Bei Bei. “We are sad to see her go, but excited for the contributions she is going to continue to make to the global giant panda population,” said the zoo’s Brandie Smith. — Read it from Reuters via Yahoo

A new study from Duke University finds that female meerkats can produce twice the testosterone as males, who have more of the hormone in other species. Female meerkats with naturally high levels of testosterone and related hormones are more likely to be leaders, but they also tend to be big bullies — swiping food from the females beneath them or banishing them if they become pregnant. Dominant females tend to live longer and give birth to 80 percent of the surviving litters, the researchers said. The study was published in the journal Scientific Reports. — Read it at Phys.org 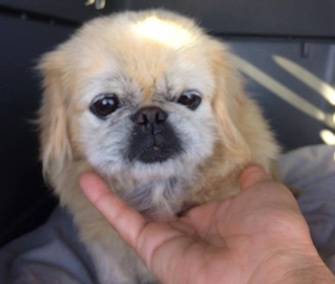 San Francisco Animal Care and Control / Facebook
Mooshu was missing for 10 years when she was found by a Good Samaritan.

Erika Slovikoski was taking her own dog for a walk in the San Francisco area Tuesday when she heard a dog’s cries for help. She found a 12-year-old Pekingese without a collar stuck on the side of a steep hill. Thinking the dog had been missing for a few hours, she brought her toSan Francisco Animal Care and Control. That’s where her microchip was scanned and her owners were contacted. It turns out that Mooshu had actually been missing for 10 long years. “So much time, I hope they enjoy saying hi again,” Slovikoski said. Mooshu’s owners are traveling out of the country but were delighted to hear the news that she was safe. Mooshu is staying with a friend of the family until they return and can be happily reunited. — Read it at ABC 7 Chicago

One very special animal at the Cincinnati Zoo was honored at City Hall this week for his work in comforting orphaned baby animals. Blakely, a rescued Australian Shepherd, has had a particularly busy year, playing the role of surrogate to five cheetah cubs at the zoo who lost their mom. Like most parents of toddlers, he’s now focusing on teaching the cubs the difference between fighting and playing. Impressed by Blakely’s selfless acts, the city of Cincinnati issued a proclamation declaring Tuesday Blakely Day. Sounds like he deserves it! — Read it at People Pets